The Tower at Scottsdale Landing 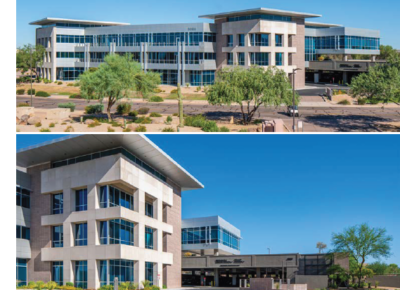 Sagicor Life Insurance Company is a full-service life insurance company that operates in 22 countries Their Scottsdale location at the Galleria was nestled in the heart of old town Scottsdale where they occupied nearly 25,000 SF on the 3rd floor. The Landlord had acquired City approval to build a five story class A office adjacent to their building, however Sagicor had a clause in their lease that prevented the Landlord from blocking their view. With nearly 3 years remaining on their lease and City approval to build a new Class A office Sagicor was left with a decision to stay and re-negotiate their lease or relocate.

• CPI negotiated a substantial buy-out of their current lease.
• Within two weeks of site selection a lease was fully executed.
• CPI negotiated a new lease on a Class A 27,000 Square foot office under market rents.
• CPI negotiated $1,485,000 ($55.00 PSF) Tenant improvement allowance in addition to substantial rent abatement and other concessions that was a positive economic impact to Sagicor.
• City permits for the new construction and Tenant Improvements build-out were approved in a record time of 4 weeks.
• Tenant occupancy is scheduled for May 8, 2020.

“After being in our current space for nearly 20 years, an opportunity presented itself to relocate our Scottsdale office. Michael helped us each step of the way. He was able to analyze our current options, bring together a team of people that included architects and space planners and quickly find a shortlist of properties and draft proposals. Once our desired property was selected Michael was successful in negotiating key deal points that were important to us as a company. We are very pleased with the outcome and his efforts.”
– Michael Stricker – Chief Administrative Officer Sagicor Life Insurance Company