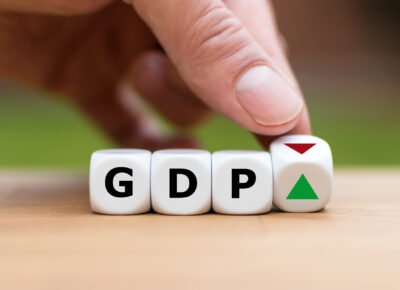 As we begin a new year in 2023, many are curious as to how the state of our economy will fair. We’ve seen growth in GDP quarter over quarter, but many capital markets have struggled to keep up.

Overall, the economic forecast is positive in 2023 – but at a sluggish 1.6% growth worldwide. While the U.S. economy isn’t expected to fall into major economic turmoil any time soon, economists are predicting an official recession before the end of 2024. Much of this is due to the catch-up game that first-world economies are playing after COVID-19.

There is much to cover in terms of an economic outlook for 2023, so let’s dive right in.

A look at GDP growth as a whole in the posted third quarter shows an increase of 3.2% – a noticeable improvement from the 0.6% decrease we saw in the second quarter. It should be noted that we also experienced a negative quarter in Q1 of 2022. The two consecutive negative-growth quarters would normally mark the beginning of a recession. However, a positive third quarter has left some analysts thinking the recession may be a bit farther down the line.

Here is look at GDP growth by industry:

Overall, 16 of the 22 industry groups posted positive numbers in Q3 of 2022. Industries of information, scientific, technical, mining, and real estate led the way. On the other hand, construction, utilities, and finance struggled to keep up.

We’ve all noticed the cost of consumer goods fluctuating throughout 2023. Volatility in the cost of living has led many to question the current and future state of our economy. Even as the price of consumer goods climbed a staggering 4.3%, personal spending kept pace at a 2.3% increase. Primarily, this higher spending was due to a rise in healthcare costs.

Considering that inflation is running at a 40-year high, personal spending is still expected to continue increasing in 2023. With massive inflation and interest rates curbing the demand for residential and commercial properties throughout the country, most economist aren’t ready to call off recession predictions.

Accounting for current factors, many consulting firms are calling for a “mild recession in the U.S. in 2023.” Current forecasts show GDP declining around 1% in 2023, with unemployment rising from 3.7% to 4.7%.

Oxford economists recently commented on the economic outlook for 2023, noting that severe recessions – such as the Great Recession – are normally “associated with balance sheet shocks.” The same economists admitted that, “household balance sheets in aggregate are in great shape (currently), nonfinancial corporate balance sheets are also healthy, and state and local governments are flush with cash.”

Jobless claims for unemployment insurance bring in another level of doubt surrounding the current economic state of the country. COVID-19 seemed to inspire a new sentiment in the workplace. Able-bodied citizens are now becoming more selective about where they work and how they work. Many are demanding greater accommodations, better compensation, and of course, the ability to work from home.

In the week that ended on Dec. 17, 216,000 people put in claims for unemployment insurance – a 2,000 person increase from the week before. Jobless claims have hovered around the weekly number of 220,000, with unemployment remaining near 50-year lows of 3.7%.

Present-day job demand varies across industries. Currently, technology and media are experiencing sizeable layoffs, while construction and retail industries still struggle to fill positions. Some of the more prominent growth seen in construction jobs was experienced in Houston, Dallas, Seattle, and Phoenix. More on Phoenix’s construction and real estate industry growth can be found here.

Mortgage rates have long been used to create accurate forecasting models in the real estate industry. In the final weeks of 2022, mortgage rates hovered around the 6.3% mark – well above the 3.05% weekly average in 2021. Similarly, fifteen-year, fixed-rate loans finished the year at an average of 5.6% – double the previous year’s rate of 2.3%.

While rates are still significantly higher than last year’s, over the past six weeks, rates have declined significantly. Such a decline may prove to be helpful for potential homebuyers in 2023.

Freddie Mac Chief Economist, Sam Khater, recently commented on the hesitancy many homeowners are having when it comes to listing their homes on the market. “ Many of those homeowners are carefully weighing their options as more than two-thirds of current homeowners have a fixed mortgage rate of below 4%.”

Volatility in the Stock Market

As far as the future of the stock market is concerned, we can expect fundamentals of inflation, unemployment, and corporate sentiment to play key roles. Most analysts predict the S&P 500 to re-test lows in the first half of 2023. Rising levels of unemployment and hopeful disinflation should be enough for the Fed to tighten-up weak fundamentals and push the S&P to 4,200 by the end of 2023.

Looking for more information on Commercial Real Estate in 2023?

While there is undoubtedly certain pressures facing our economy as a whole, real estate markets remain strong. The growth in construction and jobs have led Phoenix to be one of the more notable destinations when it comes to opportunity in property – both residential and commercial.

Our team at ICRE investing has a diversified reach on the real estate market in Phoenix – not to mention a lengthy network across the world. If you are looking for more information on potential commercial real estate investments in 2023, feel free to reach out to us anytime!