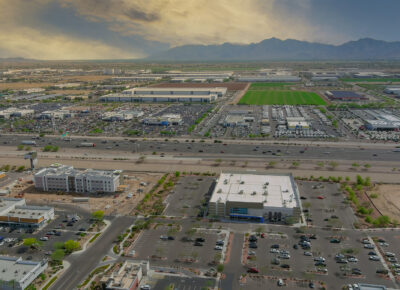 Let’s take a look at Phoenix commercial office construction trends.  Since the start of the pandemic, Phoenix has seen varying levels of new construction across building types. The office space has seen especially notable projects come to light, headlined by The Grove – a 181,494 square foot space located in the Camelback Corridor of Phoenix.

Arizona as a whole has seen construction job gains, new projects, and improvements in both class A and B office buildings. Such improvements have brought both lucrative opportunities and interesting forecasts for the future.

When it comes to the current state of commercial office construction in Phoenix, there is a lot to cover, so let’s dive right in.

The improvement in the workforce has been attributed to the influx of out-of-staters, alongside high school and college graduates looking to pivot careers into construction. Many are pivoting into a construction career in the expectation of an upcoming recession. The construction industry is booming in the greater Phoenix area and many workers are seeing this new career as a stable source of income moving forward.

The commercial office market has seen its ups and downs in recent years. Currently, Phoenix has an impressive number of Class A office buildings under construction. Total office space under construction totals nearly 870,000 square feet, highlighted by the following projects:

There is also some concern around the demand for office space. As of December, 2022, only 26% of the new office construction in Phoenix is pre-leased – all of which is at The Grove. Many experts are also concerned about the total amount of construction underway in Phoenix. They are claiming that the current 870,000 square feet under construction is nothing compared to the 2 million square feet required for a healthy office market in Phoenix.

While we may not yet be seeing pre-pandemic levels, money is still pouring into Phoenix. A great example is with the semi-conductor industry, headlined by the Taiwanese Semiconductor Manufacturing Company who’s invested over $40 billion into the Valley. Phoenix is one of the few western cities still in a period of corporate growth. Whether or not office construction grows with it is a matter of rising inflation, a questionable workforce, and overall increase in office building costs.

How does class B office construction look in Phoenix?

Class B office space makes up the largest piece of rentable square footage in the Phoenix metro area at more than 55 million square feet. It also has the highest vacancy rate (25.1%) and largest negative net absorption (2.3 million square feet) in the office market.

The lack of demand in class B office space can largely be attributed to pandemic-related issues, same as Class A. The work-from-home sentiment also plays a big role in the negative net absorption for Class B buildings. It’s an issue that’s pushing many developers to invest in commercial office renovation alongside new construction. Employees are expecting and demanding better working conditions if they are to come back to the office.

The sublease market in Class B office spaces has gone through an especially interesting period recently. Larger and larger spaces are being added to the sublease market, almost on a daily basis. To combat this, many developers are chopping larger spaces into smaller, sub-10,000-square-foot-spaces. Such buildings are beginning to sell really well in the current office market in Phoenix.

The current state of the market has brought many questions to the forefront concerning the outlook of commercial office space in Phoenix.

The Class A space is seeing the effect of multiple complex variables clash together. As we enter a period of economic uncertainty, many businesses are too fearful to make a large sublease commitment. In addition to chopping up larger sublease spaces, some developers are combatting this issue by offering shorter-term lease obligations – around 3-5 years.

As the current market comes to terms with inflation and rising construction costs, we can expect to find a sweet spot for “true demand” in the office space sometime in the near future. Some experts estimate we will find clarity in the marketplace sometime in 2023 or early 2024.

While certain aspects of the office market can seem bleak, there is still always opportunity if you know where to look. Within Phoenix, the West Valley and Deer Valley submarkets are especially hot. Prospects are currently taking interest in spaces between 1,000 and 30,000 square feet.

Experts expect new deals to go down in areas of Tempe, Scottsdale, and the Camelback Corridor throughout 2023. These locations are set to provide a desirable atmosphere for new companies and their new employees in the upcoming years.

Overall, the influx of talent that Phoenix is seeing will eventually back the struggling office market. As the work-from-homers return to the office and more talent and big companies pour in, Phoenix is poised to have a strong office market sooner rather than later.

As we are already seeing, developers and investors are currently finding lucrative opportunities within the complex office space in Phoenix. This is especially true in the smaller, more intimate 10,000 square foot spaces in specific submarkets.