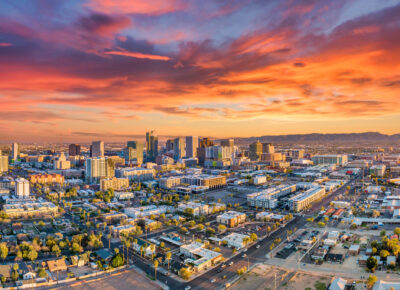 Arizona’s business growth has been phenomenal, despite being often overlooked in the mainstream media. Arizona is a state that’s currently supporting unprecedented job growth through a long list of innovative companies. As of 2022, Arizona has a total of 154 companies on the Inc. 5000 list, 37 more than the previous year.

Innovation seems to be a key factor in Arizona’s incredible growth. From tech, to real estate, to golf, Arizona – specifically Phoenix and it’s supporting areas – is making waves in multiple big industries.

Commercial real estate is taking off, unemployment rates are falling, and job growth is through the roof. Arizona has seen notable success in the last few years – it’s time to figure out why.

Geographically, Arizona is the 5th largest state in the country. According to the U.S. Census Bureau, Arizona is also the 14th most populous state. These statistics don’t seem like much until you realize how quickly they are growing. In the last five years, an estimated 1.5 million people have made Arizona their home, and that’s a trend that’s expected to continue in the upcoming decades. Much of this growth comes from dozens of new companies setting up shop in the state, each creating thousands of new jobs in their own right. There is no denying it – Arizona is growing quickly, and it has the space and infostructure to sustain this growth.

Arizona has a number of innovative companies making waves and cultivating levels of advancement unseen before. Here are a few of the highlights.

If you’ve been paying any attention to what’s happening in the golf industry the last few years, you definitely know who PXG is. Ranking at just over number 2,000 on the annual Inc. 5000 list, PXG is a company known for a dedication to world-class apparel and equipment. They’ve reconstructed the direct-to-consumer model in golf, dominating the market in more than 50 countries worldwide.

When the company was founded in 2013, they faced a lot of speculation for entering such a “saturated” market. However, the booming golf-centric environment in Phoenix and its surrounding areas proved that PXG could beat the odds.

This Arizona based company is changing the way homes are sold in America. 72SOLD is currently one of the top 500 fastest growing companies in the United States and ranks an unbelievable 10th place in terms of the fastest growing real estate firms in the country. 72SOLD is one of the many reasons Arizona’s business growth supports a bustling residential and commercial real estate market.

PetSmart was founded in Arizona in 1986 and still has its headquarters in Phoenix. For over three decades the company has stood at the top of the pet food and pet toy industry. PetSmart still stands atop the market, even after being faced with eCommerce competition by companies like Chewy and Petsense. They currently support nearly 50,000 jobs in the greater Phoenix area alone.

In the last 3 years, Arizona’s top 500 companies have seen an average revenue growth of over 2,000 percent, while also adding nearly 100,000 new jobs to the local economy. These same companies have contributed to the 217% increase in six-figure jobs in Arizona from 2015 to 2020. These numbers account for Phoenix ranking second among the fastest growing metro areas in the country. It’s no wonder as to why so many people are flocking to Phoenix.

According to Phoenix Mayor, Kate Gellogo, “The Phoenix metro area is leading the nation in high-wage industry growth, including semiconductors, electric vehicle manufacturing, biosciences, start-ups, and more.” With more legislation expected to pass supporting the manufacturing of semiconductors and microchips, lawmakers estimate Arizona to add upwards of 70,000 jobs in the next few years alone. It wouldn’t be surprising to see a sustained growth in Arizona for years to come.

It isn’t just the 300 days of annual sunshine bringing big companies and waves of talent to Arizona. The state’s business environment incentivizes more growth by offering some of the lowest operational costs nationwide. Even under somewhat progressive federal administrations, Arizona has bucked the tax-hiking trends, cultivating a business climate that encourages growth, investment in R&D, and innovation across multiple industries.

A few of Arizona’s tax-related highlights include:

Arizona promotes a pro-business environment by providing a completely refundable income tax credit for qualifying capital investments and job creation projects. The state also recently founded the Angel Investment Program, which provides an additional tax credit of up to 35% for investors who make capital investments in businesses certified by the Arizona Commerce Authority. Such tax benefits account for the many reasons investors in commercial real estate and other business ventures are frequently looking Arizona’s business growth strategy as the gold standard.

The state’s tax credits don’t stop at a corporate level either. In 2021, Arizona passed an unprecedented law governing the state’s income tax. Arizona has since simplified its income tax, reducing the top rate of 4.5% by implementing a flat income tax rate of 2.5%. This change makes Arizona’s state income tax the lowest in the nation.

Arizona, like many of the states in the western half of the country, has seen consistent growth in both population and industry over the last several decades. However, in the last few years, economic changes, improved financial infostructure, and a long list of incentives have turned Arizona into one of the top 5 fastest growing states nationwide.

With an expectation that more and more people will be calling Arizona home in the years to come, it’s safe to say this growth will continue. Arizona is turning into a top destination for innovative businesses, talented professionals, and investors in the realms of both commercial real estate, big business, and more.

Are you looking to take advantage of Arizona’s business growth? At ICRE Investment Group, we work with commercial investors, property owners, companies, banks, and commercial loan servicers seeking the highest quality of services in the greater Phoenix, Scottsdale, Mesa and Tempe Arizona regions. We are also have access to commercial investment properties across the globe. Contact us for more information today!